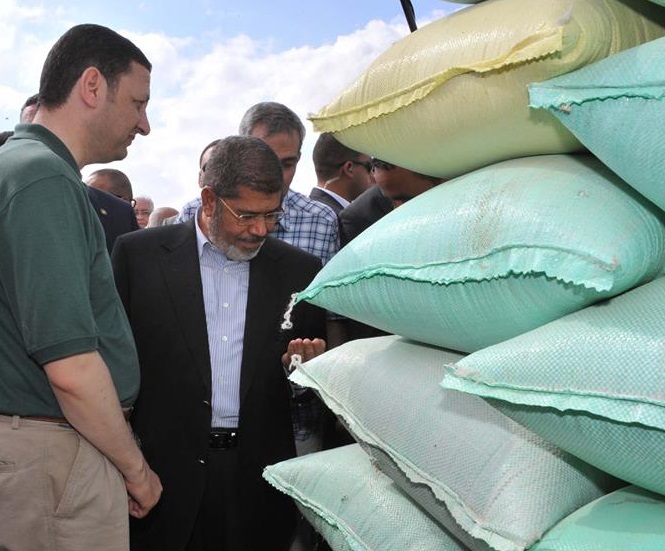 Egypt will stop all wheat imports within the next four years, depending only on domestic production, President Mohamed Morsi said in a speech last Wednesday delivered from a wheat field near Alexandria

“The current [production] rates are excellent and I think by the end of the week we will reach 2 million tonnes, which is around half of what we are seeking this year,” he said.

“Wheat production is expected to surge by 30 % to reach roughly 9.5 million tonnes in 2013, compared to previous years, where production was estimated at seven million tonnes,” Morsi added.

The president emphasised that Egypt is looking to achieve 12 million tonnes in two years, which is more than 80 % of the nation’s domestic need for wheat.

Morsi pointed that the primary goal is to stop importing wheat in four years.

However some experts disagree with the president’s opitimism. Sherief El-Kherby, an economy expert, said that this speech is not scientific. Former minister of Supply and Interior Trade Gouda Abdel Khalek concurred with El-Kherby on a TV show on Tahrir satellite channel, saying that although “we are going to be happy if Egypt achieved self-sufficiency, but experts realise that this is not going to happen”.

Economy expert Abdel Khalek explained that “the land allocated for agriculture is limited, so increasing production will be limited as well”.

Minister of Supply and Domestic Trade Bassem Ouda has said he expects a harvest of 9.5 million tonnes of domestic wheat this season, which runs from April until early June.

About half of the harvest ends up in government-owned flour mills, with the rest being sold on the market.