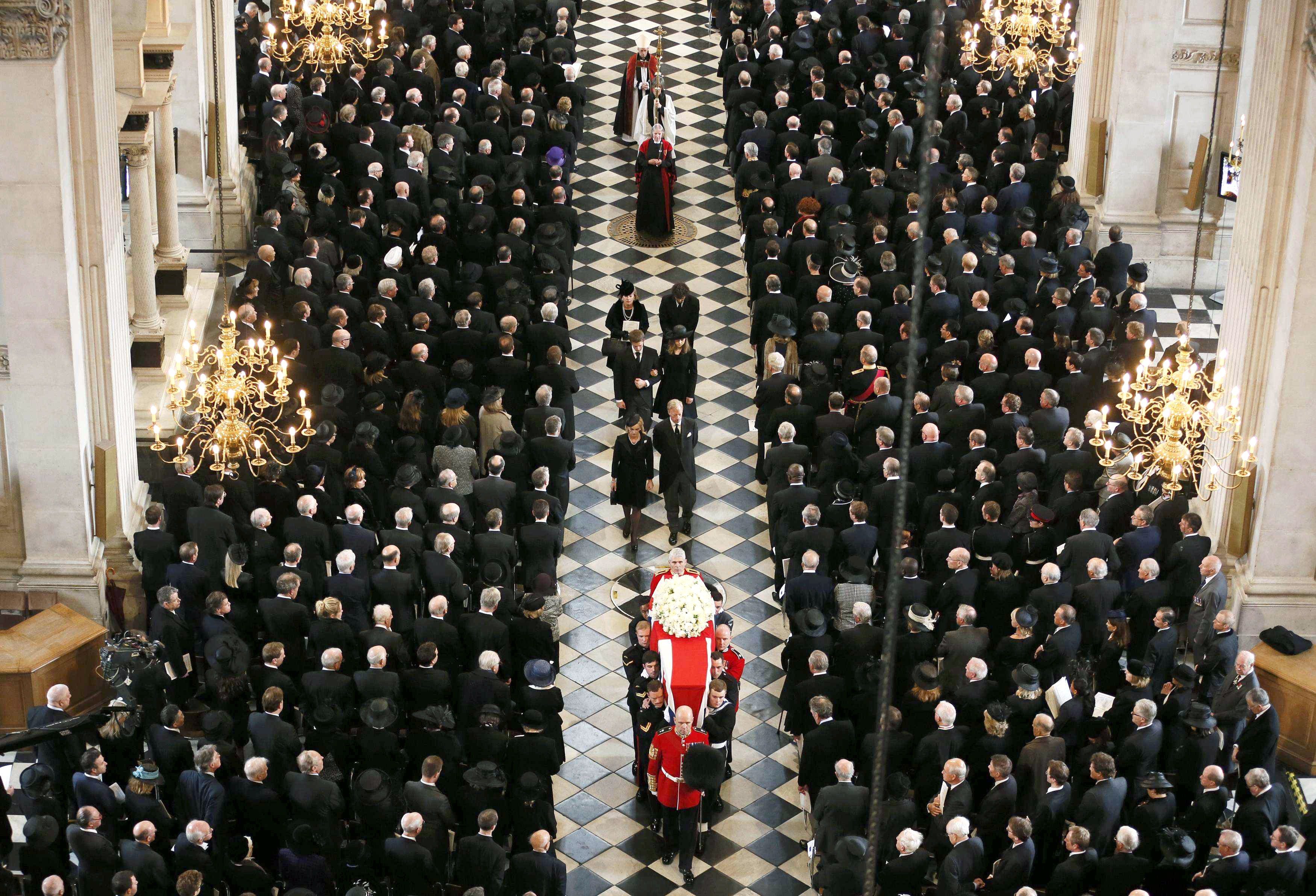 (AFP) – Thousands of well-wishers applauded Margaret Thatcher’s coffin as it passed through the streets of London on Wednesday before a funeral filled with pomp and splendour for Britain’s polarising former prime minister.

Queen Elizabeth II led the British establishment and representatives of 170 countries in bidding farewell at St Paul’s Cathedral to the Iron Lady, who had a profound impact on her country and helped end the Cold War.

But in a sign of the bitterness her legacy still provokes at home, several hundred protesters turned their backs as her funeral cortege went by, booing and chanting “Maggie, Maggie Maggie! Dead, dead, dead!”

Tens of thousands of members of the public turned out to watch Thatcher’s coffin travel from parliament to St Paul’s, many breaking into spontaneous applause and throwing flowers.

Some 700 soldiers, sailors and airmen in full ceremonial uniform lined the route as the coffin was carried first by hearse and then by horse-drawn gun carriage, as a military band played funeral marches.

Some 4,000 police officers were deployed along the procession, amid heightened security following the bombings at the Boston Marathon and fears of disruption by left-wing groups.

At the cathedral, Queen Elizabeth II led the mourners countries in a rare tribute from the monarch, who had not attended a prime ministerial funeral since Winston Churchill died in 1965.

In his address, Bishop of London Richard Chartres said Thatcher was a polarising figure but insisted there was no place for politics at her funeral.

“After the storm of a life led in the heat of political controversy, there is a great calm,” he told the 2,300 assembled guests, all clad in black.

“The storm of conflicting opinions centres on the Mrs Thatcher who became a symbolic figure — even an -ism. Today the remains of the real Margaret Hilda Thatcher are here at her funeral service.”

Thatcher’s coffin had arrived at St Paul’s following an hour-long procession from Parliament, during which parliament’s famous Big Ben bell was silenced.

It was draped in the Union Jack flag and dressed with flowers and a card reading “Beloved Mother — Always in Our Hearts”, a message from her twin children, 59-year-old Mark and Carol Thatcher.

— The ‘best prime minister since Churchill’ —

The pavements along the route were packed by well-wishers, many of whom had risen at dawn to travel to London.

“I wanted to pay my respects to the best prime minister since Churchill,” said Gloria Martin, a property developer in her 60s with an array of “I Love Maggie” badges pinned to her chest.

“She was strong, she was resolute, and she put her country first above any idea of popularity.”

The crowd included veterans of the Falklands war, viewed by many of her admirers as Thatcher’s finest hour and which played a central theme of the ceremony.

Servicemen from units that fought in the 1982 conflict with Argentina carried Thatcher’s coffin into St Paul’s while two brothers who served in the war walked behind.

Argentina was pointedly not represented among the mourners at the service, who included the prime ministers of Canada, Israel, Italy, Poland and Kuwait.

But the pomp and splendour — paid for with millions of pounds of public money — have sparked criticism from those who argue that Thatcher was too polarising a figure to merit such a state-sponsored send-off.

Some in the crowd turned their backs as the funeral cortege went by to protest at the damage wrought by her radical free-market economic reforms, which created mass unemployment in Britain’s industrial heartlands.

“We’re spending £10 million (11.7 million euros, $15.3 million) on it and that’s disgraceful and unacceptable at a time of austerity,” said 22-year-old student Casper Winslow, who held a placard reading “Rest of us in poverty”.

The government has yet to disclose the costs of the funeral but insists it will be less than the reported £10 million.

Cameron insisted it was right to give Thatcher a proper farewell.

“It is a fitting tribute to a great prime minister respected around the world,” he told BBC radio.

“And I think other countries in the world would think Britain got it completely wrong if we didn’t mark this in a proper way.”

The funeral included Christian hymns reflecting Thatcher’s strict Methodist upbringing, and Bible readings by Cameron and Thatcher’s granddaughter Amanda, followed by a blessing from the Archbishop of Canterbury, Justin Welby.

Her body was to be cremated in a private family ceremony.

Britain’s first female prime minister, who was in office from 1979 to 1990, had suffered from dementia and was rarely seen in public for the final years of her life.

She died from a stroke aged 87 nine days ago.

Her death prompted tributes poured in from around the world for the role she played in bringing down the Iron Curtain, but sparked renewed debate at home over her legacy.