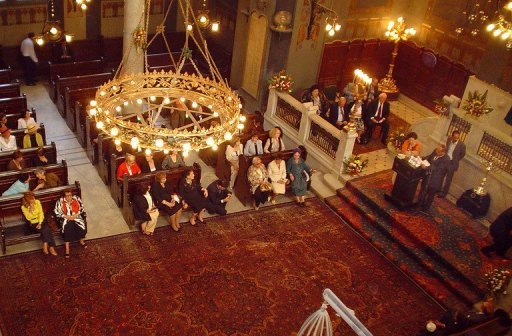 The long-term president of the Jewish Community Council (JCC) in Egypt, Carmen Weinstein, passed away in the early hours of Saturday morning. According to the JCC newsletter Bassatine News (BN), Weinstein had been suffering from poor blood circulation and knee-related issues for some time.

Weinstein, 82, had been an active member of the small Jewish community in Egypt, attending official functions and recently inspecting renovation works at the Maadi Synagogue annex.

“The JCC and BN grieve the passing of this matchless member of Cairo’s Jewish community and extend their condolences to Carmen’s younger sister,” the BN newsletter said.

The funeral will take place on Thursday at the Bassatine cemetery after services are concluded, after which those who could not attend will be able to offer their condolences at the Adly synagogue.

According to Magda Haroun, a member of the community, Weinstein was a courageous albeit stubborn woman who held the Jewish community in Egypt together. “This is a big loss for the community, especially in Cairo where we are all women,” Haroun said. “We want to keep the Jewish heritage in Egypt as intact as possible. There were once 120,000 Jewish people in Egypt in the past, and now there are less than 20 in Cairo and roughly the same in Alexandria.”

“The Jewish legacy in Egypt is a part of the country’s past, present and future, and we want to work to preserve that heritage until we are all gone,” Haroun added.