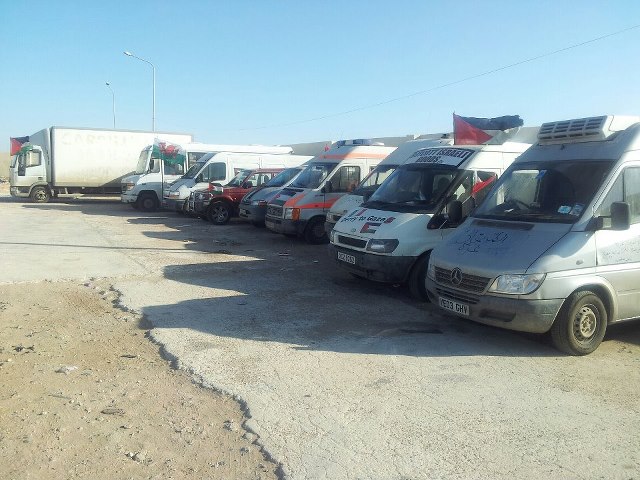 An aid convoy bound for Gaza has been stalled at the Libya-Egypt border for more than a week having been turned away by the Egyptian authorities. The Ministry of Foreign Affairs released a statement on Tuesday announcing that Egypt has granted the convoy permission to enter Gaza through the Rafah border crossing.

According to Laura Stuart, a volunteer assisting the convoy, the convoy leader has been waiting at the Libyan side of the Salloum border crossing for more than a week.

The ministry statement “granted approval for the convoy’s application” and pledged to continue its cooperation with the convoy to help deliver the aid to Gaza. The ministry has granted the convoy permission to access the port of Al-Arish via sea and land.

As the convoy cannot travel through the border crossing, the alternatives are land or air travel. “It is not feasible to hire a ship and an airplane to carry the convoy vehicles and passengers to Al-Arish from Libya. They have been quoted £60,000 to do that,” Stuart said.

“It looks as though some elements of Egypt’s security are still following an out-dated policy of non-cooperation with the aid convoy’s request to drive through Egypt,” said Stuart.

She reported that the convoy has decreased in size because of the delay caused by the Egyptian authorities. Some members “have reluctantly had to leave and go home because of work or family needs”. She added that many members of the convoy are still in Libya waiting to enter Egypt. “I believe these people consider it a matter of personal honour to ensure that the aid and vehicles reach the people of Gaza so are prepared to sit out the wait for permission to enter Egypt,” she said.

Stuart said that the convoy has travelled through the UK, France, Spain, Morocco, Algeria, Tunisia and Libya. She said the convoy was often provided with police escorts in North African countries and “met by welcoming committees with an interest in human rights and humanitarian aid work, plus the ordinary citizens of those countries who feel so sad about what the Palestinians have to endure”.

Many members of the convoy were part of the Freedom Flotilla raided by the Israeli Defence Forces in 2010. The raid ended with the death of nine activists and many injuries.

The group used its Facebook page to encourage people to contact the Egyptian authorities to demand the convoy be allowed into Egypt. “We appeal to those in a position to make the plight of the aid convoy known to the leadership in Egypt to please do so,” Stuart said.