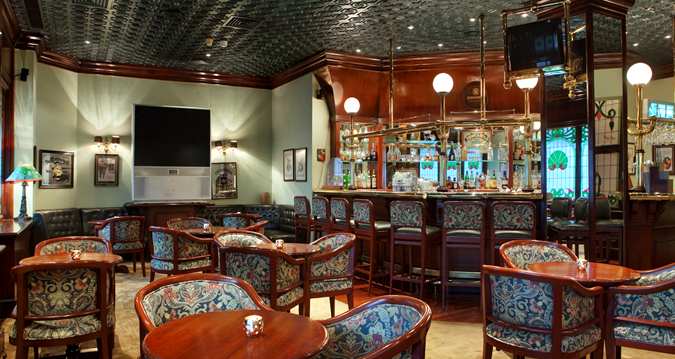 Cairenes don’t usually attempt to rediscover old restaurants in Cairo’s downtown hotels. Ramses Hilton, and almost all its in-house restaurants, has been around for too long to pose as a new adventure for clients with a daring appetite. Sherlock Holmes restaurant and pub in Ramses Hilton has challenged that rule.

Located at the heart of Cairo, only a few metres away from Tahrir Square, the Hilton promises proximity to downtown as well as a vantage point for most revolutionary activities. Add good food and entertainment to that, and you have a positive tourist attraction.

Inside Sherlock Holmes, though, it’s hard to still remember it’s Tahrir Square outside and not Piccadilly Square. Taking after its intriguing name, the restaurant tries its best to act as British as the detective it was named after.

Pictures of Sherlock Holmes and Dr. Watson make up most of the decoration. You can also find old commercial advertisements occasionally making an appearance. Authentic, but rather historic; the furniture could use a bit of remodelling. I’m sure those multi-coloured tub chairs are no longer in style in Britain.

The restaurant itself can prove to be a bit airless. Being also a pub, a large wooden bar surrounded by high chairs takes up almost one-third of the place, leaving the dining tables to form an L-shaped figure. Owing to that bar characteristic, Sherlock Holmes’ large plasma screen airs football games whenever they’re played.

Apart from their English/Arabic cuisine menu, Sherlock Holmes is offering its customers a new curry promotion. Every Thursday from 7 pm until 9 pm, an Indian cook visits the English restaurant/pub and brings with him a small Indian banquet. Why the English restaurant/pub chose to serve Indian, and not English, food as a promotion remains a mystery. Yet, the experience is worth reflecting on.

The promotion involves an open buffet of curry-related food. Despite the exotic idea, one must admit disappointment at the scarcity of options to choose from on the buffet. Yet, the food was still hot and the waiters were more than ready to offer a helping hand. The Indian chef who prepared the food even came by for a brief visit to introduce the dishes.

The Murgh Tikka Masala was especially good. Cooked with orange, spicy traditional curry sauce, the tender tandoori chicken was quite saturated with the outlandish sauce. The Lamb Khorma wasn’t much different. The lamb strips flew smoothly inside the almond gravy and curry sauce, though the meat itself was naturally more challenging to chew than the tandoori chicken. Bad news for the hot spice addicts; the Lamb Khorma isn’t spicy.

For carbohydrates, Sherlock Holmes offers the Aloo Ghabi; sautéed potatoes and cauliflower drowned in the same masala sauce used in making the Murgh Tikka Masala. Steamed rice and lentil soup are also offered alongside the dishes.

The chef was careful to offer two different kinds of bread; the crispy, spicy Papadum which resembles tacos in appearance and processed potato-chips in taste, and the Naan bread, which is served soft, hot and delicious. Available dips include mango and mint chutneys. Lemon pickles and Raita are also served.

The promotion stands at EGP 100 per person; a much overrated price considering the limited food options. Nevertheless, all the dishes were quite tasty, to say the least. Yet, no dessert or beverages are included in the promotion. Sherlock Holmes’ happy hour is also on Thursday from 7 pm until 9 pm; order any drink in those couple of hours, whether liquor or non-alcoholic drinks, and you automatically get another similar drink for free.

Is the curry promotion worth trying? Definitely, especially because the food’s quality wasn’t disappointing by any means. Is it worth the price? Definitely not; not only for the poor variety of dishes served, but also for failing to provide drinks or desserts.