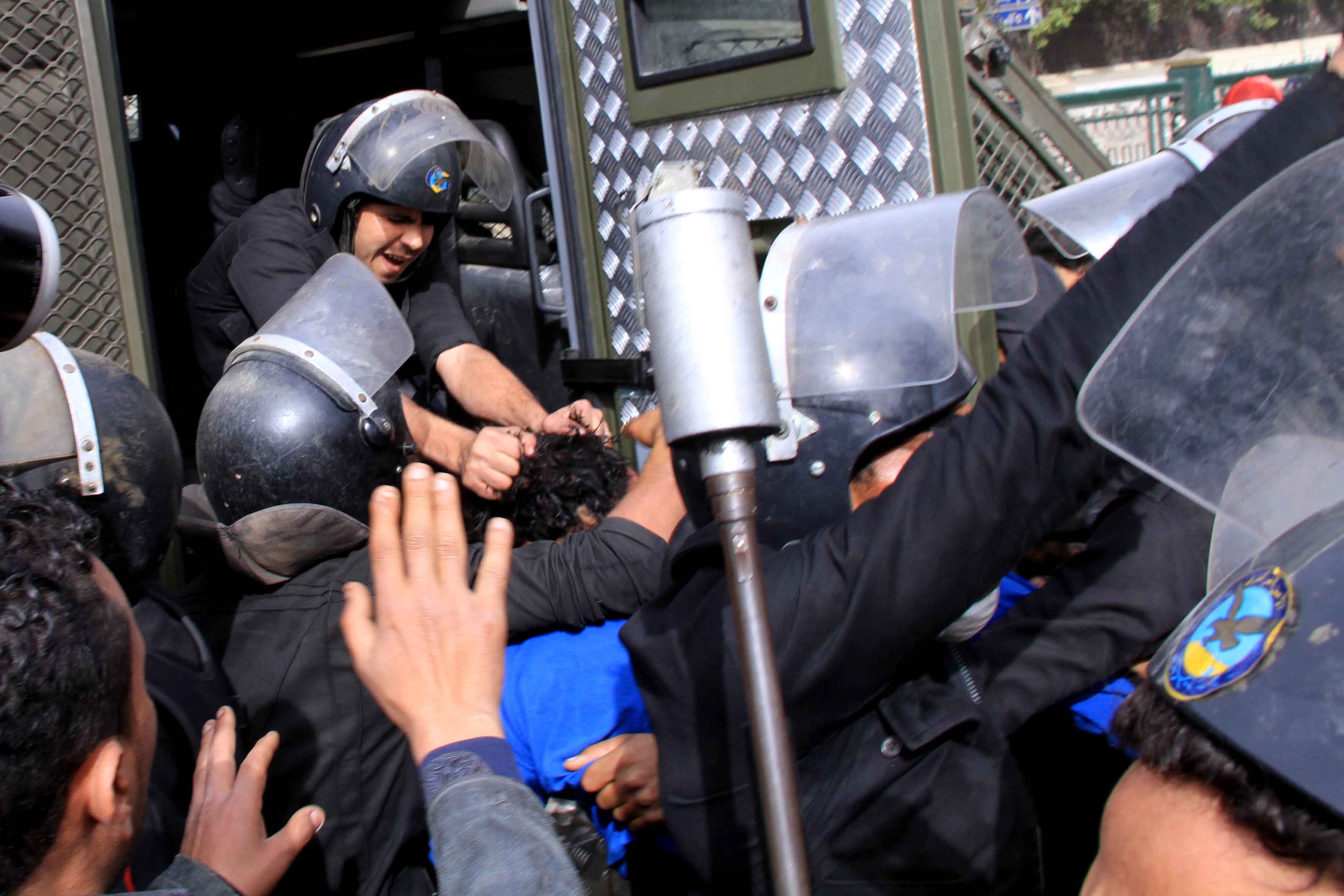 Two women were arrested from their house in Qasr Al-Aini Street, Cairo on Saturday evening.

The women, whose laptops were confiscated during their arrest, were accused of attacking security personnel with Molotov Cocktails and possession of a drug resembling cannabis, their lawyer Amr Imam stated.

They were referred to prosecution on Sunday. Imam stated the prosecutors believed their side of the story.

Imam said on Sunday: “The will be released today; it’s only a matter of time.”

“None of the conditions of arrest were met in the women’s case,” Imam said. He stated that they were watching the clashes between the police and protesters from the balcony of their house and taking photos. A central security officer spotted them and threatened to arrest them. The women reportedly rushed inside. Five minutes later, their house was raided by detectives from Qasr Al-Nile police station and central security forces.  The arrests were made without a warrant.

Imam said: “We will file a report accusing the police forces of illegally breaking into the women’s house.”

The women are Amira Abdallah, a television editor, and Amira Al-Asmar, student at the American University in Cairo. Both were investigated at the Abdin police station.

Another detainee investigated at Abdin police station was political activist Mohamed Fahmy. Fahmy was arrested on Saturday at dawn in the vicinity of Abdin police station. He was accused of possessing a homemade firearm; an accusation which he denied. Referred to prosecution on Saturday, Fahmy’s detention was renewed for four days.

Imam, who was also defending Fahmy, said: “Fahmy is a prominent activist who has been targeted by the police.” A member of No Military Trials Movement and the Front for Defending Egypt’s Protesters, Fahmy was briefly detained then acquitted in April 2012.

Rawda Al-Sayed, director of the legal support unit in ANHRI, said: “One detainee was referred to Al-Ezbakeya prosecution,” adding that he was detained for four days and that his trial is expected to take place within two days.

“He is accused of stealing a computer monitor from Muslim Brotherhood news website Ikhwan Online’s headquarters.”

Six were arrested in front of the Qasr Al-Nile police station on Friday. They were detained for four days; their detention is expected to be renewed Sunday. The six detainees are allegedly Black Bloc members, Al-Sayed stated.

In Tanta, Gharbeya, 13 were arrested on Friday, while 11 were arrested in Mahalla, stated political activist Islam Molda, who is currently in Tanta. Both sets of detainees were referred to prosecution on Saturday.

Those in Tanta were charged with sabotaging public property and spreading violence. Investigations resumed on Sunday, when police officials testified that though the police station was sabotaged, they couldn’t confirm whether the detainees were responsible.

Molda said: “Lawyers following up with the detainees were unofficially notified that their detention was renewed for four days.” He added that the prosecutor general has postponed the official decision until the local administrative building, where the detainees are currently held, is evacuated of all employees and protesters. Dozens of protesters gathered in front of the building Sunday morning, in solidarity with the detainees.

Molda stated the detainees are illegally kept in custody: “The warden told me doesn’t possess an official warrant from the public prosecution ordering their detention.”

Article 35 of the new constitution states that detainees should be informed of the reason for their detention within 12 hours.

Two members of the Social Popular Alliance Party (SPAP) were allegedly kidnapped by Freedom and Justice Party (FJP) members in Minya on Saturday. SPAP spokesperson Tahani Lashin stated that the kidnapped members Ashraf Sayed and Mahmoud Mustafa were attacked by the FJP members then handed over to the police. They are accused of burning FJP headquarters.

In Damanhour, Beheira, four were arrested on Saturday night in a coffee shop for possessing documents stolen from the FJP headquarters there. Mohamed Abul Ella, head of Al-Dostour Party’s legal committee, stated that two of those arrested were Al-Dostour party members.

He added that they were arrested after Muslim Brotherhood member Mohamed Nagui reported on them. They accused him of verbally and physically attacking them. Nagui is allegedly Shura Council member Gamal Heshmat’s secretary.

Abul Ella said: “They were given the documents by an anonymous passerby.” He added that after the headquarters was attacked, documents found inside were thrown in the street. Abul Ella claimed the documents include Muslim Brotherhood plans of infiltrating the police in Beheira.

Violence spread across the country following protests held on Friday in commemoration of the 25 January Revolution’s second anniversary.