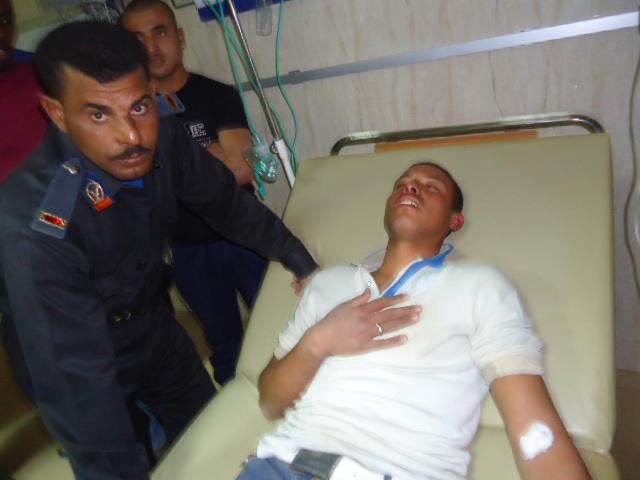 A young recruit named Muhammad Ramadan said: “Officers beat us and kicked us.” He went on to say that was a response to the recruits’ protest over maltreatment and rough conditions experienced at the hands of one of the camp’s junior officers.

A medical source at the Al-Tur local hospital said the recruits arrived in a clear state of fatigue, and that both the officer responsible for the soldiers’ maltreatment and the hospital’s staff that refused to treat them should be prosecuted.

‘Aasim Ibrahim, a political activist in south Sinai, said he would make an appeal to the prosecutor general over the maltreatment of the soldiers, who were exploited and made to fear for their careers despite having served their country.

A number of the city’s residents gathered outside the hospital after learning of the maltreatment of the camp’s new recruits.

General Muhammad Al-Hafnawi, security director for South Sinai, and Ahmed Fowzi, general secretary of the South Sinai province, both claimed that they had checked on the injured recruits and were listening to their complaints. They further stated that a decision had been reached to bring those officers responsible in front of the region’s disciplinary board.

Dr ‘Amir Masbah, general director of the Al-Tur hospital, said the 12 recruits did not show any signs of serious injury and were discharged.

The alleged assault occurred after clashes Wednesday night, which saw 350 recruits, many of whom were veteran soldiers and officers, throwing rocks and engaging in fist fights with the camp’s leadership, in protest over the maltreatment of new recruits. These clashes led to the injury of the twelve recruits who were transferred to the city’s hospital.