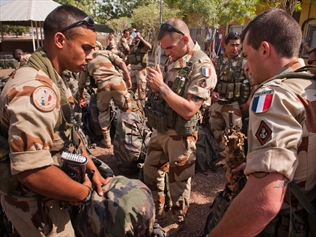 The Ministry of Foreign Affairs expressed concern over the conflict in Mali and said recent events could damage international peace efforts. The statement offered a three point plan to solve the crisis.

The ministry’s official spokesperson published a statement shortly before midnight on Monday asserting Egypt’s position on the conflict, “which emphasises the need to preserve the unity of Mali and its territorial integrity.”

The spokesperson also outlined an Egyptian plan to end the crisis. The plan is based on three pillars. The first is “the need to exhaust all means of peaceful settlement to the crisis, the use of military intervention is a last resort.” The first pillar also included stricter border control to contain the conflict.

The second pillar is “to mobilise all possible resources to support development efforts” in Mali. The spokesperson pointed out: “Investing in development is an effective option in the medium and long term.”

The third pillar emphasises the need to “activate the role of intellectual, educational and cultural institutions.” The spokesperson suggested that Al-Azhar could weigh in on the crisis “to confront and isolate extremist ideology and spread the concepts of moderate Islam.”

The spokesperson also reiterated that Egypt is willing to provide financial support to the government of Mali to help it overcome the crisis.

The ministry’s statement follows the start of French military intervention.

African-led forces are set to enter the conflict in the coming days with the mandate of a United Nations security council resolution.

On 13 January France launched Opération Serval, which carried out airstrikes on rebel targets and preparing for the African forces to join the operation.  The French operation has received logistical support from the United States, United Kingdom, Canada, Spain, Belgium and Denmark.

French intervention began in reply to a request for military assistance by Malian president Dioncounda Traoré, according the French ministry of foreign affairs.

The conflict in Mali began in January 2012 between the government and Islamist rebels who seized the north of the country. In March 2012 the Malian military staged a coup d’état which was condemned by the international community. Following negotiations, Traoré assumed the presidency and pledged to fight the rebels in order to regain control of the country.