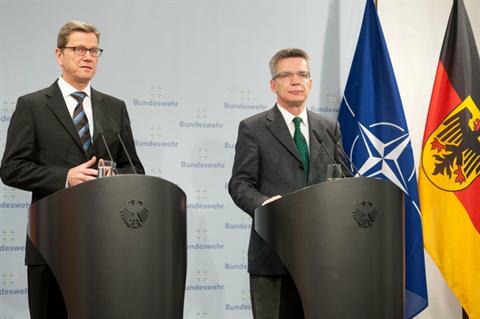 Berlin (AFP) – Germany on Monday expelled four employees of the Syrian embassy in Berlin, the foreign minister said, as part of moves to sharply curb ties to the regime of Syrian President Bashar Al-Assad.

“We are sending a clear message with the expulsion of four Syrian embassy staff that we are reducing relations with the Assad regime to an absolute minimum,” Foreign Minister Guido Westerwelle said in a statement.

“We are counting on the [opposition] national coalition growing more stable and developing as soon as possible functioning institutions for the political transition,” he added.

The ministry said that Syria’s acting envoy to Berlin had been informed of the decision earlier Monday and that the staff had until Thursday “to leave their posts.”

Germany had expelled its Syrian ambassador in May, along with France, Britain, Italy and Spain following a massacre of more than 100 people in the Houla region, north of Homs.

And in February, it threw out another four Syrian diplomats after the arrest of two men suspected of spying on regime opponents in Germany.

Ninety-four people, mostly civilians, were killed on Sunday across Syria, said the Syrian Observatory for Human Rights, which relies on activists and medics for its information.

The latest violence came ahead of a Friends of Syria nations meeting in Marrakesh Wednesday, which will bring together countries that support the anti-Assad revolt including Germany represented by Westerwelle.

Arab and Western states will consider two key issues concerning the 21-month conflict – the political transition in the event of Assad’s fall, and mobilising vital humanitarian aid as winter sets in.

Since the last meeting, in Paris in July, the number of people killed has risen from 16,000 to more than 42,000, according to the Observatory.