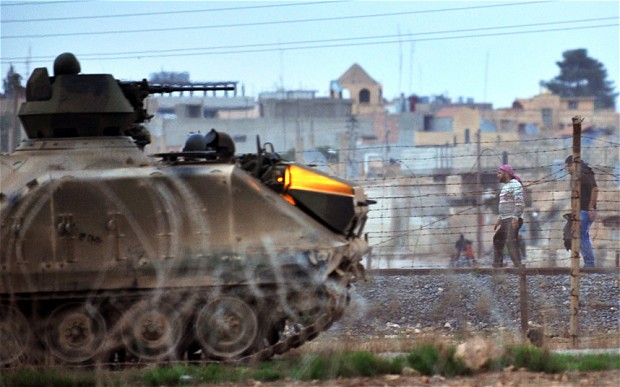 AFP – BERLIN — The German government said Thursday it had approved participation in a NATO mission to deploy Patriot missiles to help member state Turkey defend its border against Syria and will send up to 400 troops.

The foreign and defence ministries said in a joint statement that the mandate, which is expected to be presented to parliament early next week, would run to January 31, 2014.

They said the move was an “exclusively defensive measure, which as a means of military deterrent prevents the conflict inside Syria spreading to Turkey”.

NATO on Tuesday approved Turkey’s request for Patriot missiles to defend its border against Syria following a series of blunt warnings to Damascus not to use chemical weapons.

German Defence Minister Thomas de Maiziere said they had seen “no intention” by the Syrian government to deploy chemical weapons. “And therefore the deterrent serves to ensure that the capability does not become an intention,” he told reporters.

The alliance said that Germany along with the Netherlands and the United States have agreed to provide the Patriot missile batteries, which would come under the command of the Supreme Allied Commander Europe (SACEUR).

“Turkey is currently the most-affected partner in the Syria conflict. It is exposed to a potential threat from Syria,” the ministries said.t,

German Foreign Minister Guido Westerwelle said that if chemical weapons were to be used in Syria, he had “no doubt” that a new situation would arise at the UN “in which also Russia and China must reassess their position”.

Since the start of the Syrian uprising in March 2011, Russia and China have sided with President Bashar al-Assad’s regime and have repeatedly obstructed any UN Security Council action against Damascus.

Westerwelle stressed in a joint press conference with De Maiziere that a deployment in Syria was “in no way” linked to the missiles’ mandate.

Although the mandate runs until end-January 2014, De Maiziere said their goal was for the operation to end earlier although it was dependent on the situation on the ground.

Turkey is a vocal opponent of the regime in Syria, where monitoring groups say over 41,000 people have been killed in almost 21 months of conflict, while hundreds of thousands have fled to neighbouring countries.