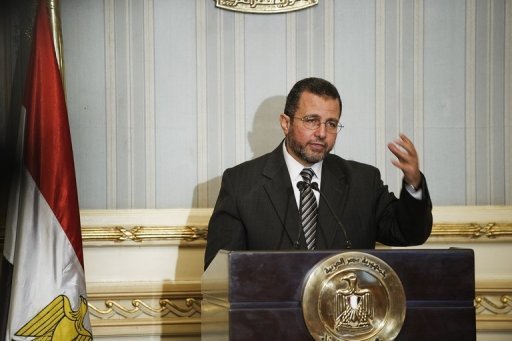 Prime Minister Hesham Qandil sends what he describes as a “clear message” urging the people to focus on production and stability.

“We call on the people to use stones to build and not to bleed the wounds of the nation,” he said in a statement.  Ahmed Sobei, a spokesperson for the Freedom and Justice Party, the political wing of the Muslim Brotherhood (MB) said that the statement shows that the PM is calling for dialogue and that it is necessary at this point to sit down and discuss the required measures that have to be taken to control violence on the streets.

Clashes have been ongoing in Mohamed Mahmoud Street since the anniversary of the Mohamed Mahmoud clashes which started 19 November, 2011. In addition, further clashes erupted in Qasr Al-Einy and have continued in the vicinity of Tahrir square. Makeshift hospitals are running to treat the injured. With President Mohamed Morsy’s constitutional declaration on Thursday night, the Egyptian street has been largely polarised. On Friday, Tahrir square was filled with anti-Morsy protesters while pro-Morsy protesters gathered at the presidential palace to show Morsy support.

Mohamed Soliman, secretary of media at Al-Karam Party said that what Qandil said signifies that the PM has to go. “He isn’t fit to be the prime minister,” Soliman said. “The president has to realise that if the constitutional declaration isn’t taken back, no one will have talks with him,” Soliman added. Al-Karama Party has joined over 35 political groups and parties to form the National Rescue Front (NRF) saying that there will be no talks before Morsy retracts the declaration.

Amr Farouk, spokesperson of Al-Wasat Party, which didn’t join the National Rescue Front, said that Article 2 of the constitutional declaration, in which Morsy states that his decisions since he became president are final and not subject to appeal, is only a precautionary measure taken against future rulings by the Supreme Constitutional Court.

However, Dia’a Ternawly, member of the founding body of the Social Popular Alliance Party (SPAP) disagreed, saying that it is a precedent for the president to have all three powers, legislative, executive and judicial. He added that Qandil’s statements are nonsense and that what is going on has nothing to do with stability, “the MB are pulling the nation towards a civil war,” he added.

Heba Yassin, media spokesperson of the Popular Current said that the Qandil’s statements are considered a “veiled threat.” She added that this is the same approach used by Mubarak’s regime.  She added that a government which came after the 2011 Revolution should not use threats like this. “No president has ever had the three powers before…we didn’t remove a pharaoh to get another pharaoh,” she added.

Tents have been up in Tahrir square after protesters started a sit-in on Friday night. Yassin said that the NRF, which the Popular Current has participated in, supports the sit-in until the constitutional declaration is retracted. “Otherwise, we will escalate through peaceful methods,” she said.

Morsy’s constitutional declaration stated that the killers of the protesters under the former regime will be re-tried, and that the decisions of the president cannot be subject to appeal. The declaration also dismissed the prosecutor general and a new one was appointed on the same day.