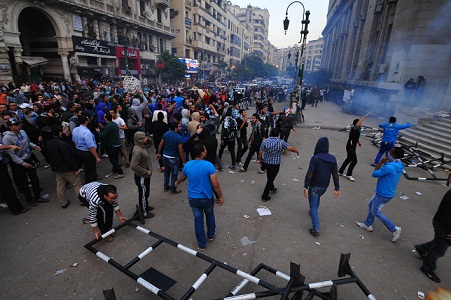 The meeting will be resumed on Sunday. According to presidential sources, Morsy listened to his team’s suggestions and recommendations for resolving the current situation and limiting the public backlash.

He told Al-Sharq Al-Awsat newspaper that he accepted the position in order to be a part of the democratic transition, but Morsy’s decisions sidelined him and he only learned about them through the media. Morsy has not announced whether he will accept Morcos’s resignation.

Reports have surfaced that a second adviser, Sakina Fou’ad, has also resigned over the declaration. However presidential sources suggested the reason she didn’t attend Saturday’s meeting is because she was ill.

Mrosy’s declaration has strongly polarised public opinion. The declaration resulted in the dismissal of the Prosecutor General Abdel Meguid Mahmoud, who was replaced on Thursday by Tala’at Abdallah; a move some judges say threatens the independence of the judiciary.

In addition, the declaration stated that those in political or executive positions tried in connection with the revolution would be retried a new “revolution protection law”. The declaration furthermore placed beyond judicial review the president’s decisions made since he assumed power and until a constitution is ratified and the People’s Assembly is elected.