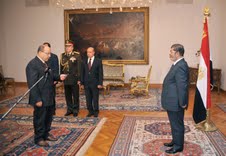 In a sudden move, President Mohamed Morsy has announced that presidential decisions are above the law, stating that they may not be challenged by the judiciary.

Morsy made the presidential declaration at 6pm on Thursday, in a constitutional declaration in
which he also appointed a new prosecutor general, gave two more months for the Constituent
Assembly to complete its work and forbade judicial bodies from dissolving it or the Shura Council.

The declaration also announced the re-trial of all former regime figures accused of crimes during the 18-day revolution.

In his second attempt to remove current prosecutor general Abdel Maguid Mahmoud, Morsy
announced that Talaat Abdalla would replace him. The declaration announced that the position will from now on be appointed by the president for a four year term.

The declaration also announced greater compensation for those injured in the 25 January revolution to match compensation paid to families of those killed.

Finally Morsy announced that he had the right to make any decision to “protect the revolution and save the nation to achieve national unity” and stressed that all his previous presidential statements were valid.

Earlier on Thursday, Morsy tweeted that his decisions will come to benefit the “utmost interest of the Egyptian people and the goals of the 25th of January revolution.”