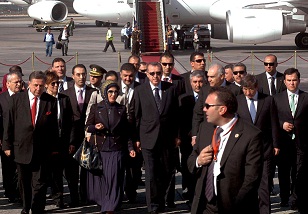 Presidential spokesperson Yasser Ali said the Emir announced that Qatar “will send urgent aid to Gaza with cooperation from the Egyptian side.”

Al-Thani met Morsy to discuss developments in Gaza and Syria. He told Morsy that he supports the efforts Egypt are taking to resolve the crisis.

Morsy and Al-Thani also agreed on the importance for a unified and solid Arab position on Gaza, said Ali.

The emir last visited Egypt on his way to Gaza last month to inaugurate a $254 million investment project to help rebuild parts of Gaza. At the end of October Morsy also announced that Egypt is sending ongoing aid to Gaza.

Earlier on Saturday Morsy and Erdoğan discussed the latest developments in Gaza; Alis said that during the meeting Erdoğan commended Morsy on Egypt’s efforts to calm the situation.

Ali also confirmed that Erdoğan and Morsy would meet in the evening to sign bilateral agreements, the framework for which was previously agreed upon during Morsy’s visit to Turkey at the end of September.

According to a statement released by the Foreign Ministry, the foreign ministers of both countries met earlier on Saturday to review the 27 agreements which covered “areas of health, transport, culture, the preservation of Islamic monuments and other areas of cooperation between the two countries.”

Erdoğan also travelled to the Arab league where an emergency meeting of Arab foreign ministers will take place to discuss the best way to resolve the Gaza crisis. Erdoğan also gave a speech at Cairo University. Before he arrived at the university around 2000 students demonstrated in solidarity with the Palestinian people, according to state owned news agency MENA.

In his speech Erdoğan talked about the situation in Gaza and Syria and Turkish-Egyptian relations. He said, “we will continue with Egypt to solve the problems of Gaza in the international community and the United Nations.”  He also said, “when it comes to Syria or Palestine we see silence and double standards; this injustice must end and we will not accept it again.”

On Egyptian Turkish relations he said, “at this stage we will support Egypt with all our strength and efforts and will not hesitate to assist them economically.”

Before leaving for Cairo, Erdoğan blamed Israel for the escalating violence; “it’s a tactic of Israel’s to point the finger at Hamas and attack Gaza,” AFP reported him saying. He added, “Israel continues to make an international racket with its three dead. In fact it is Israel that violated the ceasefire.”

Ali also confirmed that Erdoğan will also meet with Prime Minister Hesham Qandil and they would hold a joint press conference on Saturday evening.