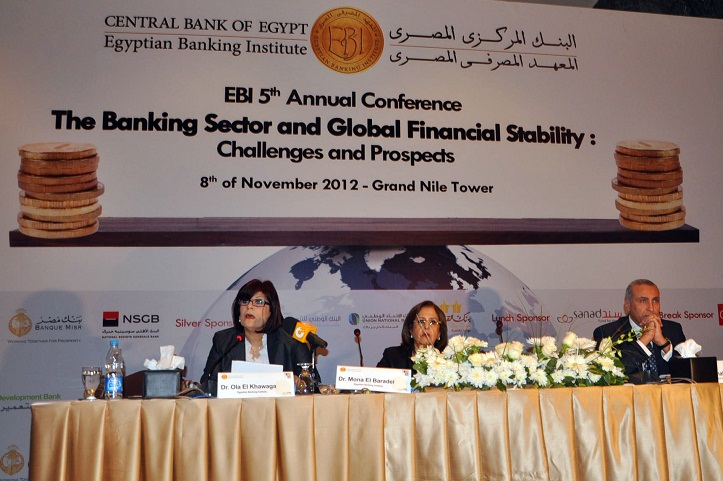 The Egyptian Banking Institute held its 5th annual conference on Thursday under the patronage of the Central Bank of Egypt. It highlighted challenges and prospects in the banking sector, as well as the global financial stability.

The executive director of the Egyptian Banking Institute, Mona El Baradei, said given the perilous status of the global economy and deep impact of the Eurozone crisis, it was necessary to find ways to restore global economic and financial stability. “The Eurozone crisis was aggravated by common monetary policy in Europe, which prevented the use of exchange and interest rates to end the crisis,” said El Baradei

The director of the Research and Awareness Department of the Egyptian Banking Institute (EBI), Ola El Khawaga, said financial globalisation is now a fact which has affected the economies of developing and developed countries. She noted the financial contagion effect has a major role in expanding the financial crisis out of its local frame in Greece to other European countries, widening its scope to become a regional, then a global crisis. She emphasised the necessity of adopting adequate monetary and financial measures in developing countries, especially Egypt, to protect them from the global crisis.

The senior regional economist in charge of the Southern Mediterranean region at the European Bank for Reconstruction and Development (EBRD), Hanan Morsy, gave a diagnosis of the banking sector in Egypt, “Egypt has a large banking sector but low financial intermediation. The state’s dominance in the banking industry, which amounts to 60 per cent of the banks’ assets, is one of the highest in the operating zone of the EBRD, comprising East and Central Europe and southern Mediterranean,” she said.

“Access to finance remains difficult and financial penetration is low” said Morsy, adding “16.5 per cent of the population have bank accounts, one of the lowest rates in the world.”

She discussed the impact of the revolution on the banking sector, saying it has heightened insecurity in the sector, and the uncertainty continues to be a problem.

On a more positive note, Morsy talked about the opportunities in the sector, she mentioned Egypt has a huge domestic market, and a growing population, confirming that once macroeconomic stability is restored, there will be big growth opportunities. On the risks, she spoke of the over exposure of the banking sector to the sovereign debt.