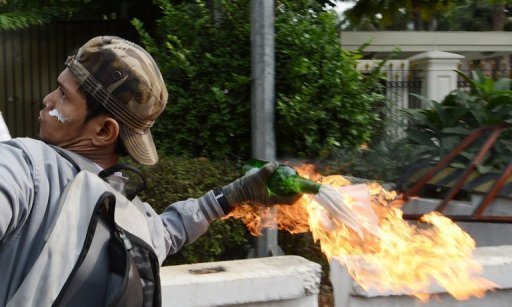 JAKARTA (AFP) — Protesters hurled petrol bombs and clashed with Indonesian police outside the US Embassy in Jakarta on Monday, as demonstrations in the world’s most populous Muslim nation turned violent.

Hundreds of people in Indonesia protested on Friday and Saturday against a low-budget film insulting to Muslims, but they had been largely peaceful.

That changed as demonstrators lobbed petrol bombs and shouted anti-American slogans. Riot police responded with bursts of water cannon and fired warning shots into the air to disperse about 700 protesters.

Police were also seen kicking or dragging away some protesters, as thick black smoke from petrol bombs wafted into the air. One policeman, bleeding in the face, was taken away in an ambulance.

“America, America go to hell!” demonstrators yelled, some carrying placards reading “death to America” or “behead those who insult Islam”.

Many of them were supporters of hardline groups the Islamic Defenders Front, known for its unprovoked armed assaults on liberals, transsexuals and nightclubs, and the Jemaah Anshorut Tauhid, which was branded a terrorist organisation by the United States earlier this year.

The demonstrators were all dressed in identical white Muslim garb and some were armed with slingshots.

Several hundred police in riot gear and at least two armoured vehicles guarded the embassy, together with a pair of water cannon and a fire engine.

Central Jakarta police chief Angesta Romano Yoyol estimated the number of protesters at 700. He said seven policemen had been injured in the clashes and taken to hospital.

Jakarta police spokesman Rikwanto, who goes by one name, confirmed that some of the protesters were arrested, but said he did not immediately know how many.

“We used tear gas, water cannon and warning shots, which are in accordance with standard procedures for violent protests of this kind,” he said.

He did not say if police were firing live ammunition or blanks.

Earlier Monday, about 50 students trampled on the American flag and threw eggs at a US diplomatic mission in the city of Medan, capital of North Sumatra province, an AFP reporter at the scene said.

The “Innocence of Muslims” film, thought to have been produced by a small group of Christian extremists in the United States, has sparked violent anti-American protests across the Islamic world.

The movie mocks the Prophet Mohammed and portrays Muslims as immoral and gratuitously violent.

But the videos could still be viewed on Monday.

“We understand that it takes time for Google to block everything as people continue to upload those sensitive videos. We appreciate Google’s cooperation,” Broto said.