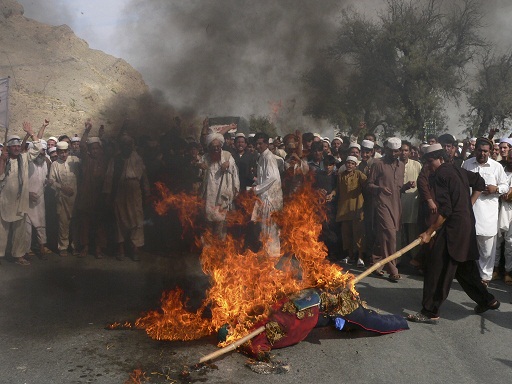 Taliban militants killed two US marines in an attack on the British NATO base where Prince Harry of the United Kingdom is deployed, according to AFP.

Camp Bastion in the Afghan desert southern Helmand province was attacked in retaliation to an American-made film deemed insulting to Islam, AFP has reported.

NATO officials said militants used small arms, rockets and mortars to storm the heavily fortified base around 10:00pm on Friday. Aircraft and structures were damaged but NATO forces managed to kill at least 18 militants and capture one, reported BBC.

Details of the attack were explained by General Sayed Malook, the head of the Afghan Army in the south. He said a suicide bomber on foot blew himself up, blasting a hole in the perimeter wall, which allowed the Taliban militants to storm inside, according to AFP.

They attacked the airfield side of the base killing two marines and causing damage, Major Adam Wojack, from the International Security Assistance force, a NATO led security mission in Afghanistan, told BBC, adding that the base was cleared on Saturday Morning.

Taliban spokesman Qari Yousuf Ahmadi said the attack was to avenge a low-budget American film titled Innocence of Muslims that is deemed insulting to Islam and has provoked a wave of protests and violence against American and western consulates throughout the Middle East.

“A number of mujahedeen fighters have carried out suicide attacks on Camp Bastion of Helmand in revenge for the insulting movie by the Americans,” Ahmadi told AFP by telephone.

NATO told Reuters that Prince Harry was on the base at the time of the attack but was “never in any danger”. According to BBC, Harry will spend four months at the base.

The attack raises questions about how Taliban penetrated the heavily fortified logistics hub that, in June, was announced by Britain as home to 28,000 soldiers, reported AFP.

Attacks on US and British troops are not uncommon in Afghanistan. In March, a member of NATO forces was injured when an Afghan man tried to ram a truck into US Marines waiting on tarmac to greet US secretary of defense Leon Panetta who was visiting Camp Bastion.

On Saturday, the coalition said in a statement that a man believed to be an afghan local policeman killed two NATO soldiers, reported Reuters.

Afghan officials and NATO expressed concern over rise in insider attacks by afghan personnel on their NATO colleagues, which resulted in 47 deaths this year, the majority of them American.

In a separate incident, a roadside bomb killed about a dozen civilians, and destroyed their vehicle on Friday in Helmand southern Afghanistan, AFP reported.

Daud Ahmadi the Helmand governor’s spokesman told AFP that the victims included eight women, three children and a young man who was driving the minibus.

No one claimed responsibility for the bombing, but Ahmadi blamed “enemies of Afghanistan”; a term often used by officials to refer to Taliban militants.

Taliban, who are fighting to topple the western-backed Afghan government of President Hamid Karzai, often use roadside bombs to target NATO and government forces but the victims are usually civilians according to AFP.