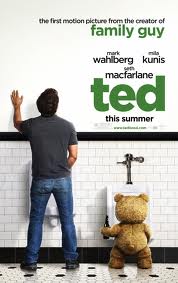 Ted tells the story of a teddy bear who comes to life when his young owner, John Bennet, wishes on a star. The walking, talking bear becomes famous for a while, making TV appearances and the like. Mark Wahlberg plays the adult Bennet who is still loyal to his by now bitterly disappointed, pot-smoking, former celebrity bear, which poses problems for his other relationships. The film has received good reviews with a caveat attached; if you do not like the juvenile, foul-mouthed humour of director Seth MacFarlane, of TV’s Family Guy fame, Ted is not the film for you.

Collin Farell steps into Arnold Schwarzenegger’s shoes in this remake of the 1990 movie. The plot has a few new twists but overall follows the story of the original as the main character tries to come to terms with the fact his memories are false and figure out who he really is. Critics around the globe have overall been less than impressed by this rehashing of an old franchise approach that Hollywood seems to favour over making original movies. Let’s just be grateful Farell does not threaten us by saying “I’ll be back.”

All the animals of yore are back for yet another ‘quest of the acorn’ in this latest instalment of the Ice Age franchise. The tried-and-tested friends-stick-together-no-matter-what plot takes our band of unlikely pals into a new adventure that adds a bunch of pirates to the cast this time around. The mixed reviews from the critics did not stop this kid-pleasing movie from becoming a box-office hit, and the 3D is said to be particularly effective. Cashing in on an idea that maybe should have been a one-trick-mammoth seems to be Hollywood’s forte. One can only hope that global warming will eventually succeed in killing off the once-likable characters. If you catch my continental drift.

Step Up 4 Revolution in 3D

The fourth version of the energetic hip-hop dance movie delivers more of the same. Situated in Miami this time, flashy dance routines filmed in 3D will entertain those who love watching this kinda thing, but the plot leaves a lot to be desired according to the reviews. With yet another franchise failing to keep the original premise fresh, Step Up is happily following in the dance steps of the previous three versions. Since nobody goes to these films for anything but the dancing, none of that actually matters.