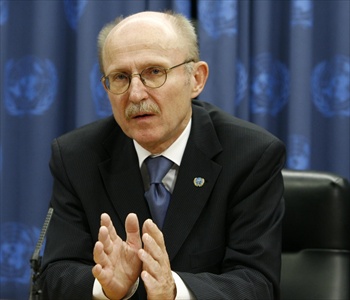 By Wilfried Lemke, Special Adviser to the United Nations Secretary-General on Sport for Development and Peace

During this break in the action between the closing of the Olympic Games and the opening of the Paralympic Games in London this Friday, we have a unique opportunity to consider how both events can improve people’s lives and impact the world.

Some may see the Games only as a cutthroat competition where athletes put their bodies to the limit so they can hear their national anthem played over the loudspeakers, while fans dress in the bright colors of their home countries and count the medals won. However, underneath the bravado of each nation, behind the confident exterior of each athlete and beyond the commercial considerations, there lies the true spirit of the Olympic and Paralympic Games, which matches the fundamental values of the United Nations: tolerance, respect, equality, inclusion and peace.

On the field of play, athletes embody these values in a number of ways, from kicking the football out of bounds when a player is hurt to shaking hands or sharing hugs with opponents at the end of a race. Doing so, they show the true spirit of sport, competing on a fair and respectful basis. Athletes also stand for these values when serving as volunteers in their own communities, visiting developing nations throughout the world and serving as Goodwill Ambassadors for the UN and other organisations. I applaud those athletes who have truly embraced their responsibilities as role models, leaders and agents for change, as they recognise how their celebrity can be used to help make the world a better place.

Athletes are not alone in their capacity to effect change, with the hosts of the Olympic and Paralympic Games also in a unique position to create a powerful global legacy. As host of the 2012 Games, the United Kingdom has embraced this opportunity to invest in the future of their country and the world with the ‘International Inspiration’ programme. This programme has, according to the organisation, benefitted over 12 million young people in 20 countries, and will continue to create sustainable social, economic and sporting legacies throughout the country and abroad. I commend the efforts of the UK government, the London Organising Committee and their partner organisation UNICEF in setting the bar so high for future sporting events.

The London Games have also been conceptualised as the ‘Games for Everyone,’ where diversity and inclusion are celebrated and featured in the Olympic and Paralympic Games as well as in the legacy efforts. This publicity and support of diversity and inclusion sends a powerful message around the world that diversity and difference—be it in ethnicity, origin, lifestyle, religion or physical ability—is not a barrier to progress but can be a driver of it. Also, I am pleased that the UK, which hosted a precursor of the Paralympic Games in 1948, the ‘Stoke Mandeville Games,’ particularly emphasised the importance of the Paralympics.

Although the Olympics and Paralympics are nowadays part of the single bid a city puts forward benefitting from economics of scale, still much needs to be done to reach equal prioritisation regarding sport for persons with disabilities. Stakeholders include international organisations, governments but also the media. With regard to the latter, in most countries coverage of Paralympic sport unfortunately still lags behind, while in some it does not exist at all. More public awareness is needed to change prevailing negative perceptions in society, including those towards persons with mental disabilities. In that connection, Special Olympics International and their World Games have made much progress in transforming prejudices and promoting the rights of athletes with mental disabilities for instance.

The Olympic Truce is one example of this partnership. The Truce is an historic part of the Olympic Games; in ancient times, all warring parties laid down their weapons during the Games, providing relief in times of constant war. This tradition of the Olympic Truce was revived in 1993 by a UN Resolution, reminding the world that the peaceful spirit of the Games can be a stepping-stone for advancing conflict prevention and peacebuilding objectives.

This past year, the UN Resolution calling for the Olympic Truce for the 2012 London Games was adopted and co-sponsored by all of the 193 UN Member States, indicating the importance that the international community places on the value of sport for peace. While a concrete universal ceasefire was unfortunately not observed so far, with ongoing conflicts in Syria, Afghanistan, and other countries, the Olympic Truce remains a noble goal and a powerful reminder of the spirit, ideals and historic potential of the Games. The Truce also reaffirms the actions of many programmes and organisations working towards unity and reconciliation in communities around the world.

Other efforts in the United Nations to support and promote the values shared with the Olympic and Paralympic families include, just to name a few, the work of the UN Environment Programme on environmental protection and sustainability, the World Health Organisation’s contribution to disease prevention and control and the engagement of various UN organisations in the educational programme of the Youth Olympic Games.

While I am amazed by the efforts of so many to make the true spirit of the Olympic and Paralympic Games a reality, and here I would like to pay tribute to the thousands of volunteers behind the scenes, I also dream of the Games having an even greater impact. There is no event in the world that has the power to bring so many people together, generating excitement and attention that can be harnessed for the good of humanity.

As part of this dream, I see athletes becoming even more aware of their status as social role models and more involved in promoting peace as well as sustainable change. I see gender equality and women’s rights making strides through ever-greater female participation in sports, from the grassroots up to the elite levels. I see the UN working even more closely with organising committees of large sporting events to fully harness the power of sport as a driving force towards a safer, more secure, more sustainable, more equitable future.

For now some of it is already reality, some is just possibility. But the efforts of those involved with the 2012 London Games is giving me hope that we are heading in the right direction. I encourage future hosts of sporting events and sport organisations to take up the baton and ensure that every major sporting event leaves behind a sustainable legacy.

The Paralympics: A long way from a merger