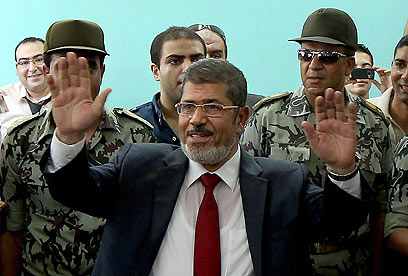 President Mohamed Morsy will travel to Tehran to attend the Non-Alignment Movement (NAM) Summit on 30 August, according to state-run MENA. This will mark the first time since Iran’s 1979 Islamic Revolution for an Egyptian head of state to visit the country.
The report comes two weeks after President Morsy met with Iran’s Vice President Hamid Baghaei in Cairo. Baghaei extended an invitation to Morsy during his visit.
Relations between the two nations since Iran’s revolution have been strained, especially due to the Egypt-Israel peace treaty, which was signed in the same year. Iran and Egypt have maintained loose diplomatic ties with lower-ranked officials paying visits.
Leading up to the revolution pledges were made to improve relations, with little materialising, although the two countries did develop some trading partnerships.
Since the election of President Morsy, Iran has made concerted efforts to reestablish relations. Following the election results, Iranian President Mahmoud Ahmadinejad was quick to congratulate Morsy on his victory.
President Ahmadinejad surprised many when he accepted an invitation from King Abdullah of Saudi Arabia to participate in an Organisation of Islamic Cooperation summit in Mecca last week. Since Syria was slated to be a main topic of discussion at the Mecca summit, initial prospects of his attendance seemed unlikely.
The Shi’a majority nation stands at odds with nations like Egypt and Saudi Arabia on a variety of issues aside from Israel, including current conflicts in Syria and Bahrain. Egypt and Iran had much closer diplomatic ties prior to Egypt’s peace treaty with Israel and Iran’s revolution.